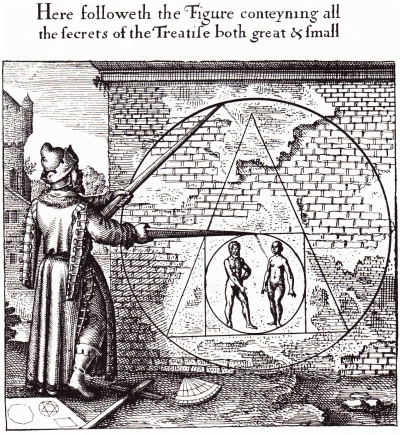 Emblema XXI of Michael Maier’s 1618 Atalanta Fugiens. ‘Here followeth the Figure containing all the secrets of the Treatise both great & small’.

"Square the circle," then triangulate the Soul. In the Atalanta Fugiens it says
to make the circle (chaos of the man and woman) into a square, which is the
four elements; and then to make the square into a triangle, the Tria Prima of
Salt, Mercury, and Sulphur; then to make the triangle into a Circle; the
completion of the Philosopher's Stone.
~

Id, Latin "it", the instincts and energies in the unconscious
mind that underlie all psychological impulses. (Collins)
~

The symbols for Ka, Ba and Akh, the trinity of the Egyptian Soul.
~
The Pyramid Decoded?
Triangulating the Eye of Consciousness.
~
Our thinking is a waking dream
in which we sleep until the Dawn;
"square the circle," triangulate the Eye,
climb the Pyramid to the Falcon's sky.
~
Last of the Seven Wonders left,
a giant three dimensional hieroglyph;
encapsulating Egyptian mythology,
rebirth of the Sun from ancient sea.
~
Circle of chaos, the id unrefined,
earthy instinctuality in the mind,
raises a Benben Mound and Capstone,
from Nun, the waters of emotion.
~
To sublimate is to step-up stones,
the building blocks of knowledge honed;
Pyra-mid, a symbolic lifting device,
the fire in the middle of intelligence.
~
Thoth, the god of magic and alchemy,
healing arts we now call psychology;
the Scribe of spells for spelling words,
emotionally-charged ideas conjured.
~
Airy thinking bubbles-up from below,
how to conquer nature's death-blow?
Fiery intuition dreams-up an answer,
transcend the earth by crossing over.
~
Thus Ru and A.N.K.H. were symbolized,
acronym for an Ideal Self transformed;
inflated by Pharaoh's pneumatic breath,
Ka, Ba, and Akh of Soul consciousness.
~
Amun is the ground of Being or Mound;
Nun, waters of chaotic potential hidden;
Kek is darkness in the air awaiting light;
Heh, life's eternal flame or divine spark.
~
Green Osiris enters the Nether region,
mortido, the metamorphosis of thinking;
mental matter is dematerialized void,
through the journey of the Underworld.
~
Rising from the corners of the earth,
a trinity, the Tria Prima resurrected;
focally converging into one Stone,
the all-seeing Eye of a Pyramidion.
~
Ka "Image," the Mind of metallic Salt;
Ba, winged Mercury of the "Spirit;"
Akh, the "radiant Soul" of Sulphur;
wedding of the Moon and Sun together.
~
Lucidity of Salt awakens the elements,
from a waking dream into higher Manas;
fluidity of Mercury's quintessence,
signifies Buddhi, wisdom from immanence.
~
Sulphur solidifies the Ideal principle,
Atma, the Cosmic Christ at the pinnacle;
three into One allows for reflectivity,
so the One can see itSelf in Totality.
~
Feels like the process is complete,
nothing left but death to contemplate;
a clear conscience, unburdened heart,
weighed against a feather light.
~
Uraeus, "she who rises-up" uncoiling,
Ouroboros now forms a Halo Circle;
sealing the Stone into a Star on high,
Wadjet and Ra, Serpent-Sun ashine.
~
Ankh is the anchor of the Soul,
grounding the mind in heaven's realm;
the "Field of Reeds" for the fire Bird,
Bennu, the Seer wading in a higher World.
~
So from chaotic Nun a pregnant Mound,
forged into a Pyramid from the ground;
sacred geometry pointing to the Sun;
four dialects of the Ogdoad spoken.
~
Earth, water, air, and fire languages,
cornerstones of our individual lives,
consolidating the Soul of eternal Light,
via Salt, Mercury, and Sulphur bright.
~
Alchemical metalloid god memBrane,
transcendent trinity on the Cross divine;
circle of chaos squared into elements,
triangulating the Eye atop the Ankh.
~
The play of opposites is reconciled,
love and light shine undivided;
Pyramid of the mind's cathedral,
where Horus sails upon the wind.
~
Mercurial fluidity sweats from earth,
flies to the Moon and covers the Pearl;
refined Salt with Silver for protection,
reflecting the Gold of Solarization.
~
Now the One can see the One it is,
a trinity of Metals in consciousness;
Tria Prima of Manas, Buddhi, and Atma;
Mind, Wisdom, Self; Ka, Ba, and Akh.
~
Four elements of the ancient Ogdoad,
wise Serpents swallow their male Toads;
who journey in the Netherworld below,
to be reborn as Ra, the Sun aglow.
~
Green to Gold, Osiris into a Star,
through the belly of the Beast all afire;
blackened unto death and resurrection,
a god-Self image of the gilded Stone.
*

Amun, Nun, Kek, and Heh.
The old kingdom Ogdoad (8) of the four elemental and
primordial frog-headed gods and their serpent consorts.
"Be ye as wise as serpents." Jesus.

Tria Prima: the three metalloid compounds of the higher Self.
"Mercury is the Spirit, Sulfur is the Soul, Salt the Body." (Paracelsus). 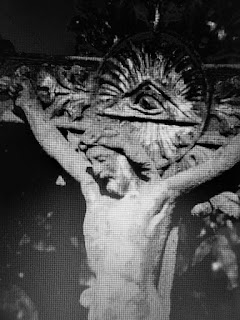 All-seeing Eye of Horus / Christ.
"Be seekers of death. Death will teach you about being chosen."
(Jesus, the Secret Book of James, Nag Hammadi library.)
~ 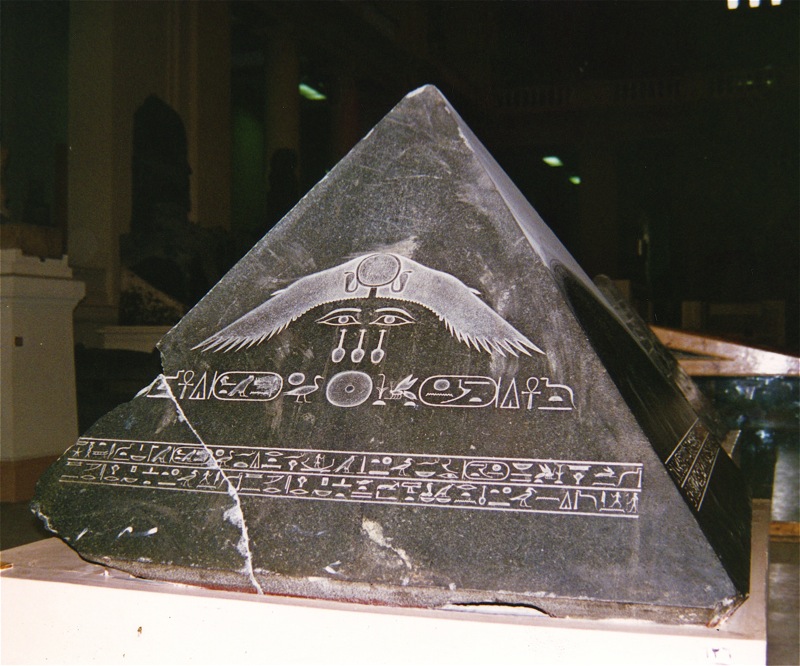 The God-Self Icon or Imago Dei. Heh, the god of eternity.
Through death and resurrection the lower light of elemental matter
is crucified, and the higher metallic shine of the god-Self image
is reborn. "You are gods." (Jesus)
~
"In this world you see everything except yourself, but there, you look at
yourself and you are what you see." Gospel of Philip, Nag Hammadi Library.
~ 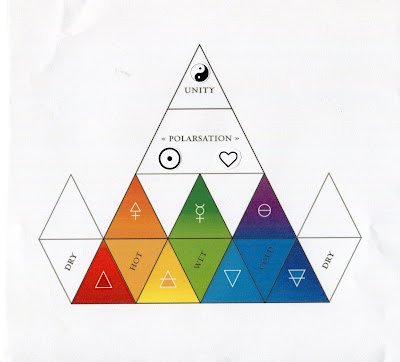 Alchemical/Psychological Pyramid.
"The alchemical colour theory of René Schwaller de Lubicz.  The interaction of the two poles creates the primordial triads of the alchemical tria prima—sulphur, mercury, salt—(orange, green, violet). The interaction of the triads forms the four elements—fire, air, water, earth—(red, yellow, blue, indigo). Diagram by A. Cheak."
~
The 4 elemental languages or dialects of the Ogdoad are sublimated up
and compounded into 3 metalloids (tria prima): refined Salt, Mercury,
and Sulfur; which are further united in the marriage of Love and Gold
(Wine and Bread), where Mercury/Silver coagulates into red Quintessence
(Blood Moon), and merges with the Sun/Gold in the heavenly wedding of
Luna and Sol; who then finally consummate as the eternal Stone of Unity.
Note: I have added the symbols for unity and polarity to complete this
psychological pyramid.
~

In the left-hand side border note the symbol for HEH
("wick-Ra-wick"), which explains the unusual shape of
Heh's loop/ru/head, and shows how the lower energies
are drawn up the spine of the Ankh into the Wine and
Bread (Blood and Stone) of the rebirthing Womb/rising Sun.
~

Posted by Collected Poems of James Cordery at 08:45

"Light spoke through his mouth." (Gospel of Truth, 2nd century)

Aido Hwedo, the African rainbow ouroboros. The one Light, pregnant with its many divine colours / qualities, refracts in the prism of consciousness.